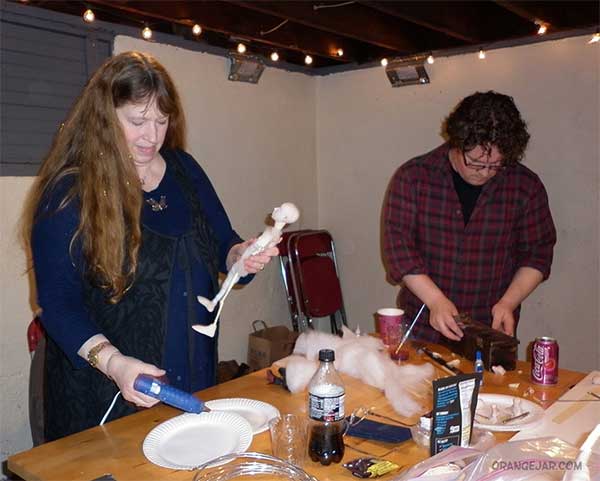 Back in February, I saw an announcement on FB that Wendy and Toby Froud will be holding a faerie character workshop in Portland. Portland! That's only a three-hour drive from my home so you can just imagine my excitement.

Wendy is the woman behind Yoda. Yoda responsible for, she is. Wendy is the fabricator, having sculpted the great Jedi Master. She also worked with Jim Henson (creator of The Muppets) in "The Labyrinth" and "Dark Crystal". Both oh so lovely films!

Toby is her son who also played the cute baby offered to the goblins by sister Sarah in "The Labyrinth".  Toby embraces this colorful history with Stripey Pajama Productions where he works with Heather Henson, daughter of Jim Henson, to produce the wonderful imageries of "Lessons Learned" (now available in Amazon too).

The workshop was for April, my birthday weekend so I said perfect, birthday getaway. On top of that, hubby and I are fans of "Portlandia" and we've been talking about going down there – everything clicked. I signed up and just managed to get my name on the list. You won't believe how fast those slots go!

But that was quickly forgotten when my Dad started having trouble with his health. I got him a consultation with a specialist so I flew to CA to be with him. That first day with the doctor, we got the worst news we could get: cancer, stage 4.

I couldn't leave his side. What I thought would be a few days for check-ups turned into months. He was in and out of the hospital so much. The first month I was there, he was confined to the hospital and in the second, we were in and out with appointments and treatments, fighting with everything we could try.

Then the end of March came and I remembered the Froud Character workshop. I wanted to cancel but my mom, my hubby and friends insisted I needed a break. I felt very guilty but I agreed, it was a chance to visit my husband too. Separation has been hard on both of us, and by some luck, schedules worked out.

I went home and my husband and I drove down to Portland. Every now and then I'd call the hospital to check on appointments; my Dad was scheduled to have a stent put in place to help his liver function better. It was an out-patient procedure and one of his friends agreed to help out and drive him there.

For three rainy days, hubby enjoyed the peace and quiet of a B&B. He had the ideal break he direly needed, he got peace and quiet to relax and read. His job has really been stressful during that time too. Me? I went out in the mornings, down to the basement of the Fernie Brae Gallery and immersed myself in the fantastical world of the Frouds. It was absolutely heaven. There's peace and serenity in sculpting and the Froud's method helped balance the turmoil inside me. 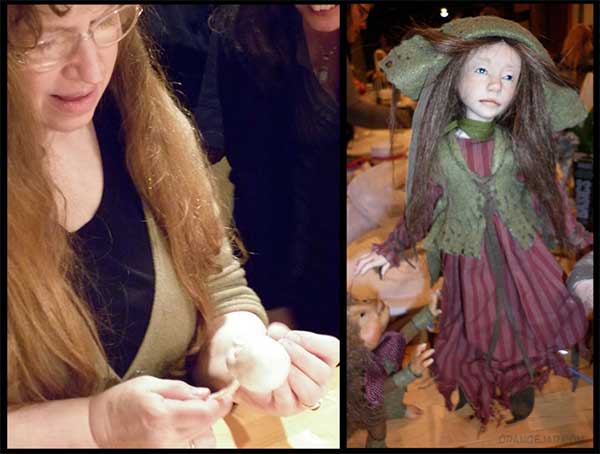 It's magic, that is all there is to it. From a lump of clay, Wendy makes this beautiful fairy on the right.
Both Wendy and Toby were friendly and very open about their styles and techniques, it was a real pleasure and privilege watching them work and learning from them.

Before we even picked up any tools, Wendy took us through a journey of the imagination where we met curious characters that served as our guides to this magical world, a world where each workshop participant met the character that we respectively recreated in polymer clay.

It was a form of meditation where we freed our minds as Wendy's voice guided us through the door of possibilities. My Dad never left my thoughts and that was probably the reason why, in my vision quest, I met a very tall, skinny, bald guy wearing a loincloth, sitting on his hunches.

Reading this back to myself, I think Gollum but no, my guy is far from Gollum. He reminded me of a very tall but skinny Kapre (a Filipino folklore character who is always described as a gigantic, hairy man who lives in big, old trees, smoking cigars) and he had the most serene expression I've seen in a long time. He handed me a house which fit in the palm of his hand. I nicknamed him "My Old Man."

When the radiation treatments started, it immediately caused my Dad's hair to fall off, not all of it but more than usual. He also started to lose a lot of weight. The day his hair started falling off, he decided to have it all shaved, he said it's going to happen anyway. He was self conscious about it at first, but like the cowboy that he was, he soon got used to it. And he's just like that, his attitude, like there's no sense waiting for it to fall little by little. He knows where it's going so he'll just deal with it.

And then there's his humor. One day, we were driving home from the hospital, after the head shave, and he suddenly told me to slow down, with a tinge of urgency his voice. Surprised I asked, "Why? What's wrong? I'm driving the speed limit." And without batting an eyelid, he responded, "The wind is messing up my hair!"

When I helped him put a shirt on. He snapped at me to be careful and I was so worried I hurt him, he quickly followed it with, "You're messing up my hair!" And then he laughed with that silly laugh of his that says he got you.

I miss my Dad. It's going to be six months since he's been gone. This post is really for him. About him. "My Old Man" is a tribute, I realized later, to him. Same way I realized while writing this blog that this post is about my experience at the Froud workshop as it is about my Dad.

My Dad never really explored his artistic side professionally but it was always showing up in everything he did. He built a boat out of popsicle sticks just for fun. He'd show us how to draw naughty drawings that would end up in a cute dog. He helped me work on my art projects. He always had a book or art material for me to try out. Even when he was sick, he showed me how to cut an eggplant so it's even and decorative at the same time.

After the meditation, we beat foil to form and kneaded clay and got the best advice on sculpting ever! Those three days were too short. There was so much to learn. I still can't get over the fact that even though they showed us how to do it and even though both Wendy and Toby started with the same materials we did, their works were simply brilliant! It's like they went from crunching foil into a ball and in the next second it transformed into wonderful dolls, so full of life, dressed in such whimsical fashion. It's really magic. 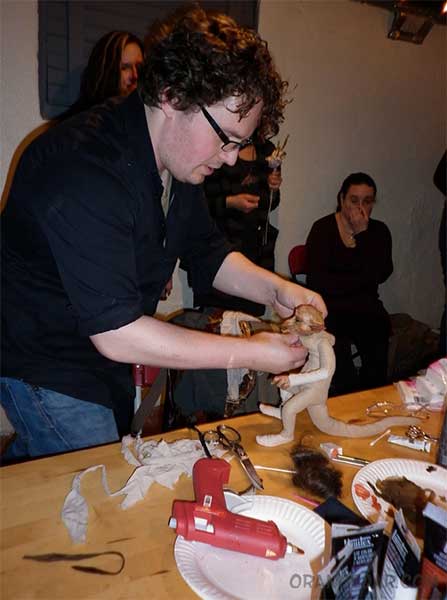 Toby started with a human face then converted it to a creature to show us the difference. Here, he was showing us how to cover the tail with the body suit. 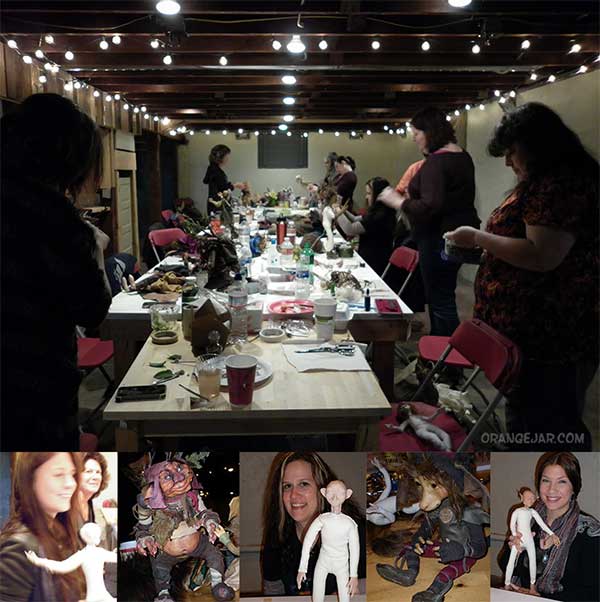 The workshop area in the basement, and some of my fellow attendees with their creations

My vision was of an old, bald, skinny man in a loin cloth with a serene expression. When I started sculpting, that was the picture in my head but because of a small technicality – we used soft, posable bodies – I had to give him clothes to cover his body parts that had batting and stuffing on it. Also, there was so much materials available; they piled all the different fabrics and fur they had for us to choose from, and it was so much fun trying different materials on!

With his serene expression, I imagined he'd be a pauper king. So I gave him a gold and black cloak and robe-like clothes over a pair of rich swede pants. 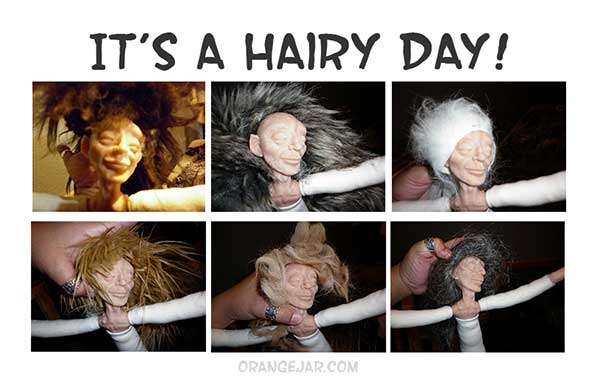 Even though "My Old Man" was bald, I decided to give him hair - they had a mountain of fabric and fur to choose from and it was too much too resist 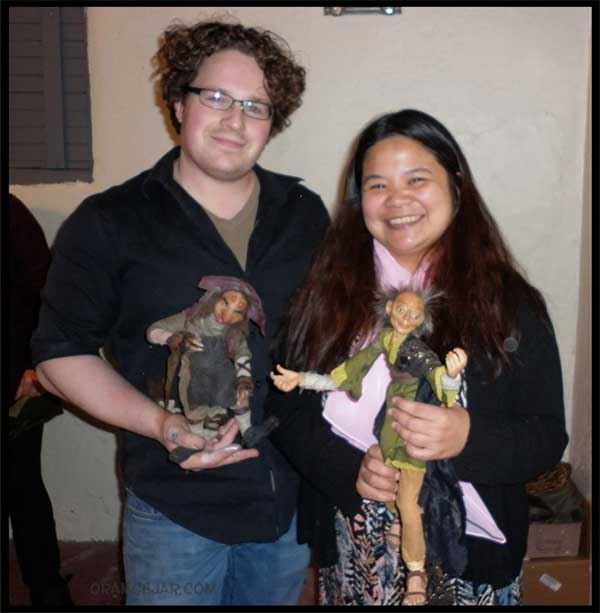 "My Old Man" with Toby's creature

We also learned about the Froud Swirl (I hope I remember the term correctly). It's a muddy concoction of paint that you use to dirty up and create authenticity with your doll's clothes. Toby advised us not to be afraid to get in there and paint it on their costumes.

That was one of the most terrifying things to do during the workshop! It's like you're trying to destroy your own work after carefully building it up. But it's a key trick. So splash on I did. My tentative strokes did get a few splatters in there. 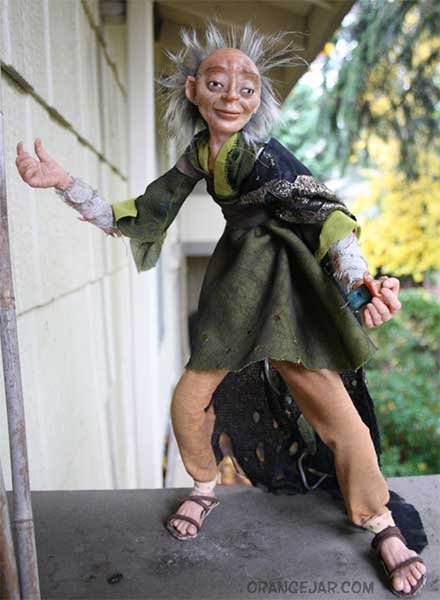 The photo I took after I wrote this post

"My Old Man" was finished during the workshop, and I went straight back to care for my Dad after. I never really got a chance to take pictures. So, in the middle of writing this blog, I got up and took a couple of shots. After I downloaded them, his pose and expression reminded me of my Dad, in a photo we took before he passed away.

It’s the creepy, scary season...and you need the

Two more beauties going to their new home to keep

It’s nearing that time of year again... do you h